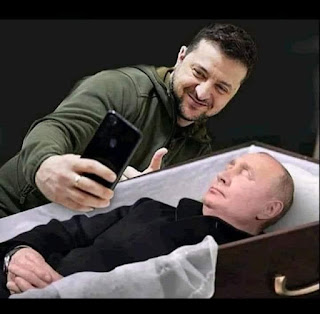 Isn’t it ironic that the hour we lost over the weekend, was the exact same hour I intended to go to the gym? Last time I went on the rowing machine, it sank! Whenever I go on it nowadays, I just sit there and drift. Isn’t life grand when you’re barmy!

Over many years, it has been well documented that Old Trafford is an extremely difficult ground for any team to win at. Could this be the reason why Manchester United are struggling this season?

I ran out of petrol today, so rang my insurance company for roadside assistance but instead they wrote my car off.

Non Stick Nora was lamenting that she had gained weight. She'd made Barmy Albert’s favourite cake and they'd eaten half of it at dinner. The next day she kept staring at the other half, until finally she cut a miniscule slice for herself. One slice led to another, and soon the whole cake was gone! Nora was upset with her lack of willpower and she knew Albert would be so disappointed. Of course he never found out, because she made another cake and ate half of that as well! 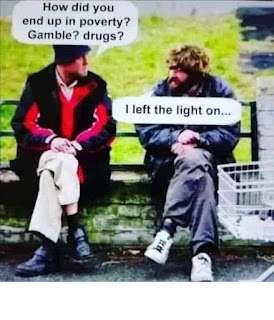 I sez to the missus, “If I were to die suddenly, I want you to immediately sell all my stuff.” “Now why would you want me to do summat like that?” she asked. “Well I reckon that you would eventually remarry and I don’t want some cretin using my stuff.” She gazed at me with a saturnine grimace and replied: “What makes you think I’d marry another cretin?”

I chose to ignore her sage remark and continued: “When I do eventually pass away, I’m leaving everything to you.” She then curtly informed me: “You already do, you lazy sod!”

Young Willie Eckerslyke went to his dad and asked him, "Dad, what's an alcoholic?" The father replied, "Do you see those four trees, over there? Well, an alcoholic would see eight." Young Willie replied, "But dad, I only see two!”

I’ve no idea why they call it Alcoholics Anonymous, because when I attended, I knew everyone there! What’s all that about then? 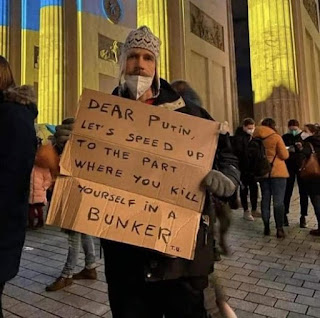 I asked Dastardly Derek if he liked Tolstoy. He wholeheartedly agreed that he did. When I pressed him on which story was his favourite, he sez: “The one where Woody is kidnapped and Buzz desperately tries to save him!” They walk among us! 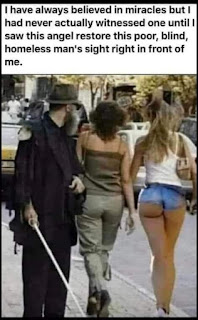 Posted by austin knight at 01:12 No comments: 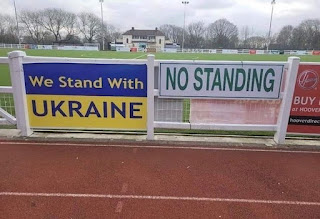 I often wonder about all the people that I have lost along the way and I reckon that packing my job in as a tour guide was the right thing to do.

Barmy Albert told Non Stick Nora: "How about I take you to a Michelin starred restaurant, and we have caviar, champagne or whatever you like?" Nora replied: "I don't need all of that, let's just go for a romantic drive instead over the pennines." Albert sez: "Oh, sorry but I wasn't thinking of spending that kind of money!"

It’s getting worse! I spotted a car with a sign on the windscreen that said: “There is no fuel left in this vehicle overnight....” Who’d a thowt it?

Yesterday morning, I spotted my neighbour actually talking to her cat. It was painfully obvious that she genuinely thought that the feline understood her every word! I came back into my house and told my little dog Alfie all about this and we both fell about laughing! 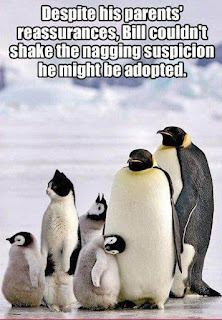 Instead of giving all our MP’s a pay rise …. Let’s all stand on the doorstep at 8pm and clap instead!

What’s the difference between a house and a home? A House is what you live in. A Home is where your kids want to put you in, so they can sell your house.

Whilst travelling around America, I went shopping in Wal-Mart. I asked the assistant if they had any Kinder Eggs. "Definitely not,sir, we don't sell them in the States - they are considered a health hazard!" "That's okay," I replied. "I'll just take these two AK- 47 assault rifles then."

It's relatively easy to tell crocodiles and alligators apart. One will see you in a while, whereas the other will see you later.

Yesterday, I phoned Radio Tameside to enter their Mystery Prize competition. The presenter answered and sez: "Congratulations on being our first caller, all you need to do is answer the following question correctly, to win our Mystery Grand Star Prize". "Fastastic!" I replied.

The presenter informed me that it was a maths question. “Superb, I’m good at maths!” "Okay then, to win our grand prize of two tickets to any future Manchester United game, including a meal and all drinks, plus full hospitality in the Premier Lounge and meet all the players after, Tell me, what is 2+2 ?" After much thought, I replied: "Seven?” 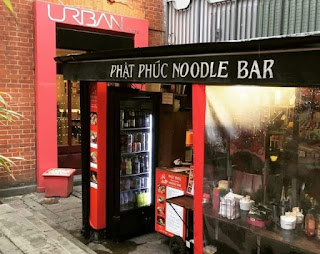 Posted by austin knight at 06:05 No comments: 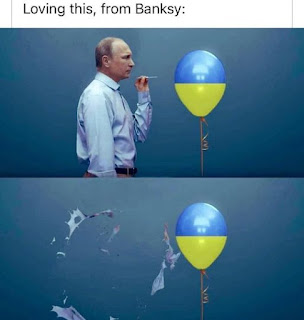 Because of McDonalds, KFC and Burger King shutting down all of their restaurants in Russia, the entire country has now become now a no-fry zone.

Q) What’s the difference between Vladimir Putin and a bucket of shit?

Doncha just hate it when you offer someone a sincere compliment on their moustache, then suddenly, she's not your friend anymore. Very fickle, some folks are.

Petrol and diesel prices have risen to such an alarming extent that Manchester cabbies are now taking the shortest route! 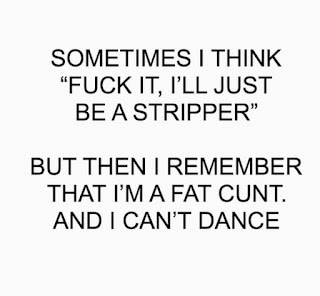 A Moscow man buys a newspaper glances at the front page, then throws it away. Next few days, he does exactly the same again. Eventually the newsagent asks “Why do you keep doing that?” “I’m just checking for an obituary” The newsagent sez: “But obituaries aren't on the front page.” “Oh, the one I'm looking for will be!” answers the bloke....

Just read an article in the newspaper about the first three minutes when you are born. They reckon that this is the most dangerous time in anyone's life. The last three minutes can't be all that clever either....

Fascinating Fact: Apparently, there is a tiny island off the coast of Italy that’s inhabited by Five Million Sicilian people. Wow! That's the biggest number I ever heard of. They must be crammed in like sardines!

Barmy Albert has got a 1997 Ford Fiesta with a full tank of petrol. He’s looking to swap for a 4 bed detached house in a leafy suburb.

Researchers claim that laughing for two minutes is more health beneficial than jogging for twenty minutes. So I'm sitting in the park laughing at all the joggers!

My wife calls it multitasking. I call it doing summat else while I desperately try to remember what I was doing in the first place. I can actually forget what I’m doing, while I’m doing it!

Breaking News: Chelsea are now so broke that Marcus Rashford is providing packed lunches for them. Caviar and Russian salad are off the menu. As Chelsea face up to a trophy-less future, because they’re skint and are unable to spend vast sums on transfers, many fans are wondering just how long government sanctions have been in place at Tottenham... 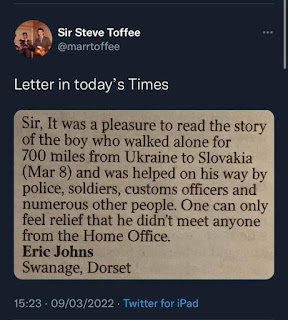 I asked the young lady at my local Co op: “Excuse me, but do you sell Quorn?” She replied: “Yes, we do. What kind would you like?” I replied: “On the Quob.” She looked at me in a perplexed manner and sez: “Does matron know that you’re out of bed again?”

Innit awful gerrin auld? When you think back to when ‘A new hip joint’ meant somewhere that you’d go on a Friday night.... 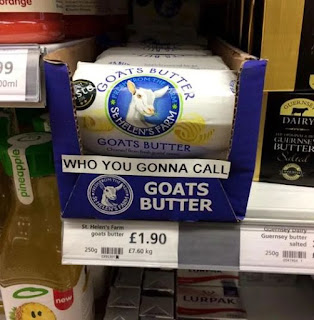 Posted by austin knight at 06:36 No comments: 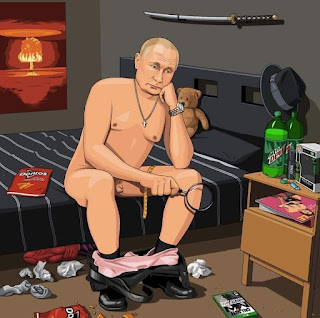 Imagine that a small band of extremely wealthy billionaire psychopaths could make you believe anything that they wanted simply by controlling what is broadcast on the telly. Who’d a thowt it?

This Tuesday was International Women’s day. It was supposed to be on Monday, but they weren’t ready in time. Of course, we lads are well used to this situation. I shouted upstairs to the missus: “How much longer are you gonna be?” She replied: “I told you an hour ago, I’ll only be ten minutes!”

Last year, I was going to have a tattoo for my birthday, but I only have a small garden and thought the neighbours might complain about the bagpipes. Anyway, in the end, I reneged and eventually got a tattoo from a temporary tattoo parlour. It’s been over a year now and the tattoo is still there. I went back to complain and the place had gone. 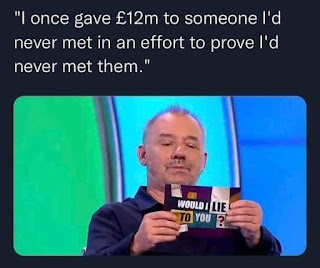 Is it just me or does anyone else think that manufacturers should write the words shampoo and conditioner in bigger print, so we can see it clearly in the shower, without needing specs which steam up and get wet so you can’t see anyway?

I came home yesterday and all the kids were on eBay. If there are no decent offers for them, I’ll reduce the price tomorrow. Last year, I sold a homing pigeon on eBay 241 times.

The missus sez: “We’d have less arguments if you weren’t so pedantic.” I replied: “fewer arguments.” That’s when the fight started!

Visited a restaurant in Manchester yesterday lunchtime and the first thing that they told us was that the Russian Salad was off menu. I don’t like those Russian dolls either. They’re so full of themselves. The local DIY shop has started selling Putin doors. They’re unhinged!

Barmy Albert was telling Non Stick Nora that Mick, who was one of his old school mates and never smoked or imbibed alcohol and exercised every single day, had dropped dead at the tender age of 51. Nora was amazed and asked Albert what had happened. Albert sez: “His parachute didn’t open....”

I was at the cinema last night and this bloke in front of me had his dog with him. The hound appeared to be actually engrossed in the movie. When the film concluded, I sez to the bloke: “This might sound daft, but your dog seemed to really enjoy that.” He replied: “Yeah, I was surprised too, because he hated the book...”

Q) My child refuses to eat fish. What can I replace it with? 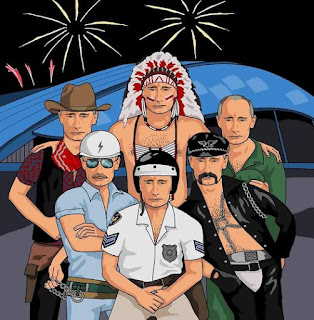 I was complementing my lovely young neighbour on the beautiful underwear she was wearing, but she couldn’t hear me through my night vision binoculars... 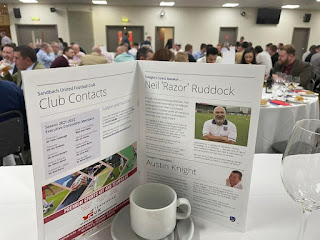 As my picture(s) show, I worked with my old mate Razor Ruddock last Friday. He is an incorrigible after-dinner speaker and nothing whatsoever fazes him. I like his style. He reckons that if folks don’t walk away from you shaking their heads, then you’re doing summat wrong! 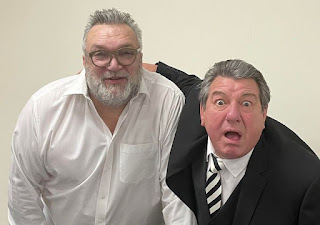 Visit my website: www.ComedianUK.com and continue the quest!   Now, get back to work!

Posted by austin knight at 03:37 No comments: