Q) Whats the difference between the Icelandic volcano and Cheryl Cole? A) The volcano is still blowing Ash. 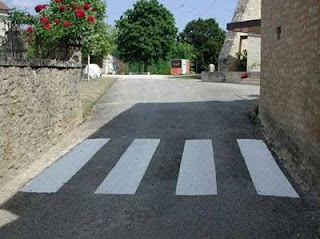 I was strolling down the High St yesterday and suddenly got hit on the cranium by a frozen lasagne, then a pack of 8 Chinese-style chicken drumsticks, then came a strawberry cheesecake (best b4 Aug 2011). Apparently, it’s all fallout from Iceland!


I sez to the missus “What have you been doing with all the grocery money I give to you?”

She curtly replied, “Turn sideways and look in the mirror!” No need for sarcasm is there!

Ever pontificated on the meaning of life? Well, this is how it can be summarised in a nutshell. On the first day, God created the woofer dog and said: “Sit all day by the door of your house and bark at anyone who comes in or walks past. When the doorbell rings, assume it’s for you. For this, I will give you a life span of twenty years.” The dog said: “That's a long time to be barking when the doorbell rings. How about just ten years and I'll give you back the other ten.” So God agreed. On the second day, God created the cheeky monkey and said: “Entertain people, do tricks, and make them laugh. For this, I'll give you a twenty-year life span.” The monkey sez: “Monkey tricks for twenty years? That's like a continuous summer season. How about I give you back ten like the Dog did?” And God agreed. On the third day, God created the cow and said: “You must go into the field with the farmer all day long and suffer under the sun, have calves and give milk to support the farmer's family. For this, I will give you a life span of sixty years.” The cow said: “That's kind of a tough life you want me to live for sixty years. ‘How about twenty and I'll give back the other forty?” And God agreed once more. On the fourth day, God created man and said: 'Eat, sleep, play, marry and enjoy your life. For this, I'll give you twenty years.' But mankind sayeth: “Only twenty years? Could you possibly give me my twenty, the forty the cow gave back, the ten the monkey gave back, and the ten the dog gave back; that makes eighty, okay?” “Okay,” said God, “You asked for it.” So that is why for our first twenty years we eat, sleep, play and enjoy ourselves. For the next forty years we slave in the sun to support our family. For the next ten years we do cheeky monkey tricks to entertain the grandchildren. And for the last ten years we sit by the front door and bark at everyone who passes by. Life has now been explained to you. Start the car!

Q) What do you call a woman who knows where her husband is each and every night?

I hope I live to be as old as my jokes. I pray that all my friends will live as long as the DFS sale continues! You too can discover the elixir of mirth by visiting my all new joke blog. Click on www.ComedianUK.com and follow the link. You can also gizza tweet on Twitter! www.twitter.com/comedianuk . Get the BBQ out, it’s gonna be crackin’ the flags!!
Posted by austin knight at 03:10 No comments:

BREAKING NEWS: Reporting massive cloud of dust over UK. Police have arrested the Man City trophy cabinet cleaner at Eastlands in connection with this incident. 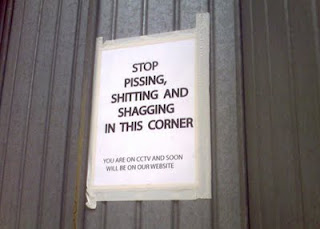 Posted by austin knight at 04:34 No comments: 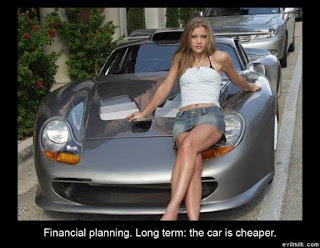 David Blaine is absolutely gutted that his record of spending 42 days doing fuck all in a box has been beaten by Dimitar Berbatov!!

Posted by austin knight at 03:16 No comments: 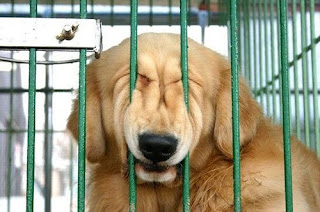 Camilla bought a new pair of shoes for her wedding which got tighter & tighter as the day went on. That night, after the festivities were finally over, she & Charles had retired to their room at the palace.


Camilla flopped on the bed and said 'Please remove my shoes darling, ones feet are killing one.'

Ever obedient, the Prince of Wales attacked her right shoe with vigour, but it would not budge.

'Harder?' Charles yelled back, 'I'm trying darling! But it's just so bloody tight!'

'Come on give it all you've got ' she cried.

Finally when it released, Charles let out a big groan, and Camilla exclaimed 'Oh God, that feels so good.'

In their bedroom next door The Queen turned to Prince Phillip and said, 'See, I told you she would still be a virgin with a face like that!'

Meanwhile back in the other bedroom Charles was attempting to remove the other shoe when he cried out 'Oh God, darling, this ones even tighter'

At which point Prince Phillip turned and said to the Queen:

A new sequel to The Exorcist is being filmed. In this version a woman hires the Devil to get a Priest out of her son...

Posted by austin knight at 05:25 No comments: 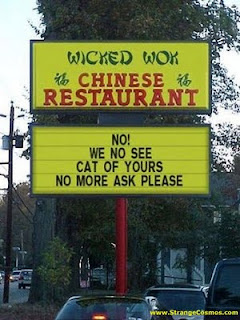 Yesterday, I was at my local supermarket buying a bag of dog food for the woofers. Whilst I was in the checkout queue, the woman behind me (she had a face like a pirates flag) asked me if I had a dog. What did she think I had - an armadillo? So, since I was off work and had little to do, on impulse I told her that no, I didn't have a dog, and that I was starting the dog food diet again. I added that I probably shouldn't, because I ended up in hospital last time, and that I'd lost two stones before I woke up in intensive care, with a matron and several doctors hovering over my prostrate form. I told her that it was basically a proper diet and that the way that it works is to load your pockets with doggy biscuits and simply eat one or two every time you feel peckish. The food is nutritionally complete so it does the business well and I was going to try it again. (I have to mention here that practically everyone in the shop was now enthralled with my tale.)
Gobsmacked, she enquired if I ended up in intensive care because the dog food poisoned my system I told her definitely not, I merely stepped off the kerb to sniff a nearby Labradors arse and a car hit me. I thought the geezer behind her was going to have a coronary, he was chortling so much. I now cannot enter the local Co-op without supervision. Alaways exercise extreme caution when you ask a comedian any simple question at all. We have all the time in the world to dream up stoopid things to say.

The reason why politicians try so hard to get re-elected is that they would hate to have to make a living under the laws that they've passed. I’m reliably informed that the next General Election on May 6th could well produce a hung Parliament. I’m all in favour of stringing ‘em up, it’s the only language these fraudsters understand.

Disclaimer: The accounts described are the recollections of the author, and may or may not represent actual occurrences or involve those named in the text. Any resemblance to real people is entirely deliberate, and in accordance with apocryphal law, accounts that are undisputed more than three minutes after this newspaper is printed become uncontrovertible truths. Visit my Jokey-Blog via: www.ComedianUK.com or gizzuz a tweet on Twitter! www.twitter.com/comedianuk.com. Now, behave yerself and get back to work! The summer is a comin’!
Posted by austin knight at 04:09 No comments: