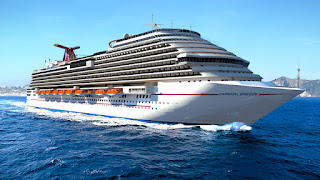 I am currently aboard the Carnival Breeze working in the Punchliner Comedy Club until October 2012, after which normal blog will be resumed.
You can still visit my website http://www.comedian.ws/ or email me: ComedianUK@sky.com 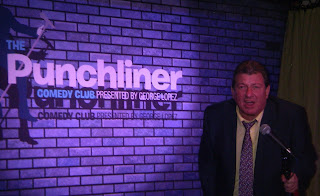 Posted by austin knight at 07:39 No comments:

BEWARE of fake Olympic tickets!! Apparently, the market is flooded with them. Just checked mine for the Womens Wheelchair Triple Jump Somersault and they seem quite genuine to me.  It reminds me of the time when I purchased a Rembrandt painting entitled 'Orgasm'.  That turned out to be a fake as well.


MAN KILLED ON GOLF COURSE...
A foursome of men waiting at the men's tee while a fourball of ladies were hitting from the ladies' tee.
The ladies were taking their time. When the final lady was ready to hit her ball, she hacked it 10 feet.
Then she went over and missed it completely.

Then she hacked it another ten feet and finally hacked it another five feet.  She looked up at the patiently waiting men and said apologetically,   "I guess all those fucking lessons I took over the winter didn't help."

One of the men immediately responded, "Well, there you have it. You should have taken golf lessons instead!"     He never even had a chance to duck. He was 43.......

I normally don't pass on any rude or nude stuff though it depends on what you define as rude. I accidentally found this site (after looking half the night). I feel that you're old enough and mature enough to handle this.
http://mr-desi.com/fun_pages/freeporn.html

Switching off the wife's life support machine was the most difficult thing I've ever had to do.  Think about it. Have you ever tried to pull a plug from a socket, when you've got a glass of chilled chablis in one hand and a vuvuzela in the other? Good job that I'm ambidextrous innit!

Yes folks, it’s THAT time of year again! Now that the footie season has ground to a halt, it is time for yours truly to find alternative employment. This year, I am going to be working on a brand new ship! It is called the Carnival Breeze and features its very own comedy club, which I will be appearing in. I attach a photo of this magnificent vessel, moreover, you can take a virtual tour of the ship on
www.youtube.com/watch?v=rsK4l2rKqTM
Don’t forget my website and Jokey-Bloggington is online 24/7 for your enjoyment, just click on

http://www.comedianuk.com/
and all will be revealed. My email is: comedianuk@sky.com
This column will reappear in the autumn, so until then, have a great summer, play Fruit Ninja
and chillax, like my mate Dave!  Watch out for Levenson!!

Posted by austin knight at 04:03 No comments: 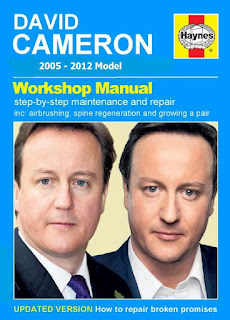 It happened to me when I was a kid.  I came home from school and my parents had moved.  Maybe that's why they wrapped my lunch up in a road map.  Alas, there were no Sat-Navs in those dark days.  Cameron loves the Sat-Nav, especially when the voice announces, "Make a u-turn."  My Sat-Nav has the voice of Bonnie Tyler on it.  It keeps telling me to 'Turn Around', and every now and then it falls apart!


Apparently, David Cameron left his eight year old daughter at a local public house. It is however, well documented that he is on record as saying:   "In these tough economic times, austerity measures and cuts have to be made somewhere."   I assume that as soon as he'd got home and it dawned on him that he'd inadvertently left his offspring in the pub,  he was forced to do yet another u-turn!

When Cameron says "We're all in this together," he's obviously not talking about the family Range Rover Evoque, driving back to Chequers after having a nosebag at the local battle-cruiser.*  To make amends, he has awarded himself a £100 voucher and is sending himself off to a parenting class.  This being a a futile effort to distract everyone from the Levenson enquiry, where it was discovered that he was that far up Rupert Murdoch's arse, he could see Jeremy Hunts feet.

To be honest, I have made the same mistake.  Two days ago I left my daughter at my local pub, The Pit Bull & Stanley Knife and I haven't seen her since.  Mind you, she is 34. In mitigation, she did trap off with a pikey and we really do need our drive tarmacing.  Moreover, we are in desperate need for lucky heather.

Yesterday, the prime minister blamed the previous Labour government for leaving him
with no choice, other than to leave the kid unattended at the nearby inn.

The most absurd fact about this unimportant  occurrence was the fact that yesterday mornings BBC Breakfast News programme had dispatched a reporter to stand in tempestuous rain outside the The Plough in Cadsden, Buckinghamshire, (which wasn't even open) to report on summat which happened well over two weeks ago.  We live in strange times.  Kids run wild and dogs go to obedience school.

Meanwhile, I hear on the grapevine that Her Majesty the Queen's corgi's are absolutely overjoyed that Prince Phillip is back  home at Buckingham Palace after a weeks stay in  hospital, recovering from a bladder infection. They were totally fed up of getting battered every day for pissing on the chaise longue. No doubt there was a rainbow over the inglenook during his enforced absence.

Polish football fans have been warned that if they cause any more trouble during Euro 2012 that they will be sent back to the United Kingdom.

Bad news for Harry Redknapp.  But at least he'll receive a £3 million payoff.  Which after tax will be .....  £3million!!  In fact, whenever I order a MacDonalds drive through I like to pretend I'm Harry Redknapp talking to the press.  Just like when I held a coconut shell up to my ear and I could hear the sound of a one legged horse standing in a stationary position.   The word on da street is that he  going to manage the Switzerland national team, just so he can be nearer his bank accounts.  The future for Harry looks Rosie.

Breaking News:  ‎25% of women in the United Kingdom are on medication for some manner of mental illness. That's bloody scary. It means 75% are wandering around with no medication at all...

Madonna went into florist and sez "I'd like to buy some very special rare flowers." The assistant replied, "Orchids?" Madonna sez, "No, just the flowers"....

The missus just asked me, "When we go to Egypt, can we go on a camel?"  I said, "GTF, it would take flamin' ages to get there on a camel."