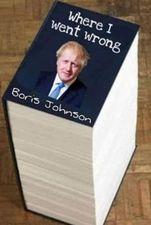 The government has announced last week that you are not allowed to meet people in your garden in the freezing cold, tempestuous rain and Force 8 gales.  Hallelujah! At last, summat positive!

I’ve put on acres of weight during this lockdown lark. My stomach is flat.  It’s just that the L is silent. I also have flabby thighs, but luckily, my stomach covers them.

Moreover, scientists have now confirmed that women who’ve put on weight during lockdown are likely to live longer than men who mention it.  Fascinating! 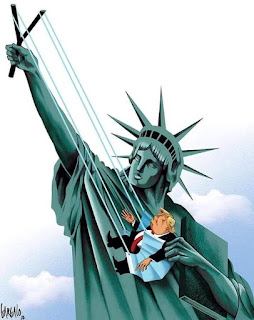 During lockdown, all the days tend to blend into a vast chasm of uncertainty, not quite knowing what actual day it is. However, now the clocks have been meddled with, this compounds an already surreal farrago, whereby not only do I not know what day it is, I don’t know what time it is either. Talk about eschewing obfuscation!

Although the kids are back at school, because of social distancing issues, it’s been unanimously decided that there’ll be no Nativity plays this year.  This is primarily because the three wise men are facing a travel ban. The shepherds have been furloughed, the Innkeeper shut down.  Moreover, Santa cannot work as he would break the rule of six with Dasher, Dancer, Prancer, Vixen, Donner and Blitzen. Poor Rudolph is self- isolating because of his red hooter!

I’ve cancelled my trip to the Bahamas this winter tide, because of this Covid gubbins.  I was also unable to go in previous years, because I was skint. 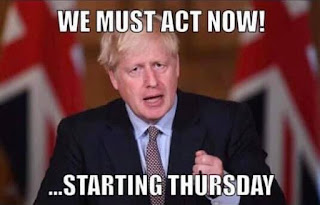 I’m totally flabbergasted! I haven’t worked since March 14th and the missus has just clicked the central heating on.  Can this year get any worse?  Of course it can.  We’re back on Lockdown 2 - The Sequel.  At a shut down cinema near you.  Watch out for The Dom Cummings 2nd Lockdown Tour 2 to Barnard Castle.  You couldn’t make it up!

Anyone who reckons that marriage is a 50/50 relationship fails to comprehend two fundamental principles. 1) Women. 2) Fractions.

Fascinating Fact: Argentina is surprisingly cold...  In fact it's bordering on Chile! 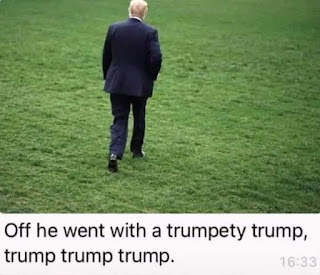 Q) Why can’t Donald Trump enter the White House anymore? A) Because it’s for Biden!

If my lottery numbers don't win a substantial prize this week I'm gonna complain. I demand a recount. I refuse to accept Trumped up figures.

Did anyone see my chiropractor joke about a week back? I have subscribed to Chiropractor Monthly magazine for many years.  Contact me if you want any back issues. 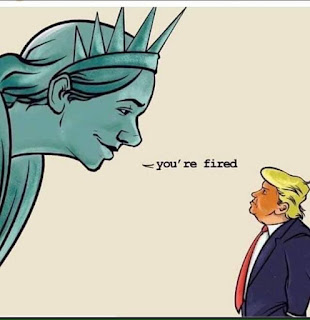 It has been confirmed by the World Health Organisation that canines cannot contract Covid-19.  Therefore, any woofers that have been placed under quarantine can now be safely released back into the community.  Yes, folks! WHO let the dogs out! Woof, woof, woof, woof! 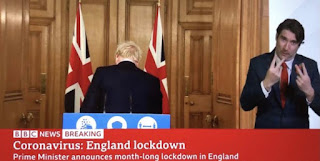