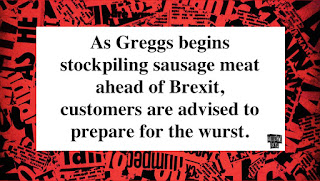 Brexit! The undefined being negotiated by the unprepared in order to get the unspecified for the uninformed. MP’s attended the Commons last Saturday for the first time since 1982!   Doctors, nurses and other NHS staff have offered their sincere condolences.

I’ve called my dog Brexit. He wants to go out, but if it’s raining, would like to stay indoors. He likes being a bit on the outside, but still having his dinner, on the inside. 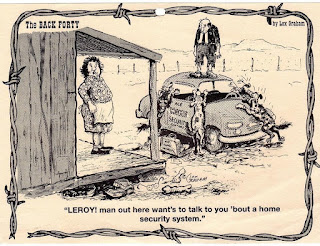 Roll on Brexit! Nothing is made in the UK any more. I bought a new radio and it said ‘Built in Antenna.’ A country I’ve never heard of before....

Men. Listen up! All that women want from you is everything and nothing, not at the same time, but on a constant basis, occasionally and always. In order to clarify the aforementioned, I asked Alexa: “Alexa. What do women want?” That was 3 days ago and Alexa ain’t shut up yet! Now do you understand?

Metropolitan Police have shifted the Extinction Rebellion protesters from London Bridge by opening a pop-up job centre. As a further measure, they intended to use water cannon containing a repellent. It was soap! Ryanair also confirmed today that any protestors on top of their planes will be subject to a charge of £75.

I was in Tesco at the checkout with a prawn sandwich and a packet of cheese and onion crisps and the young girl asked me: “Would you like to go for a drink?” Well, she was half my age, most voluptuous and very attractive, so I sez: “Yeah, give me your number and I’ll pick you up later tonight.” She gazed at me, with a saturnine grimace and replied: “I meant a drink for the Meal Deal, you moron!”

Scientists reckon that in the year 2050, with advances in technology, we will be able to have robotic spouses. It was mooted that these robots could be programmed to kill you. So, no change there then!

Thought for Thursday; I’ve just switched from eating venison to pheasant. It was an absolute game changer. 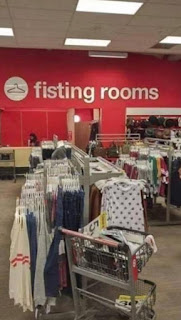 This bloke parked his car right outside Buckingham Palace and a security guard came sauntering across and sez: "You can't park there!" "But I'm here to cut Prince Charles’ hair," said the bloke. "Have you got a permit?" asked the guard. "No, he just wants a short back and sides."

A Scotsman walked into a bar in Glasgow. In a usual scenario, he would be accompanied by an Englishman and an Irishman, however they were both still in Japan. 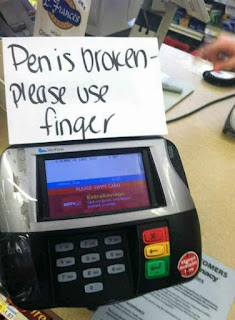 If you don't do anything else today, be sure to tell someone about the hilarious comic Austin Knight and this craze-ridden newspaper column! Spread the gospel around the local pub, the lap dancing bar, the dole office, on the train coming back from community service, on the bus returning from visiting your probation officer and at 30,000 leagues beneath the sea. Okay, forget about the underwater gubbins but do all the rest, that's an order! Visit my website too! www.ComedianUK.com You can email me: comedianuk@sky.com 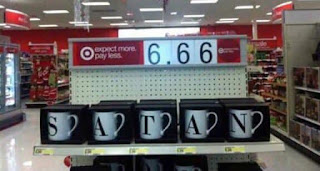