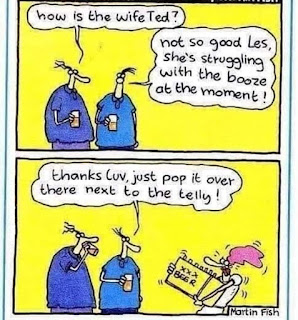 BBC News: "People sent long distances for Covid tests" I've heard people have travelled from London to Castle Barnard to get their eyes tested, too.

Non Stick Nora wanted a divorce because of Barmy Albert’s obsession with metaphors. He told me:- “It came like a bolt out of the blue, you could have knocked me down with a feather, took the wind right out of my sails, I can tell yer...” Isn’t life grand when you’re barmy!

What kept everything stuck down before Newton invented gravity?

Thursday Mathematical Quiz: - George is 82 his girlfriend is 22. How much money has George got? Obviously, more than sense! 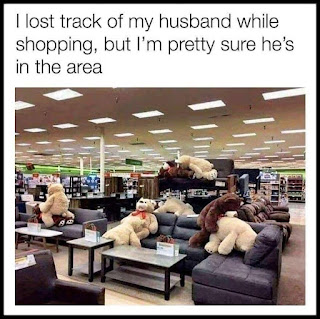 Fascinating Fact:-Caerphilly cheese is cheese made carefully whilst Edam is made backwards.

Just one more sleep until I lose my job as a night security guard. It’s much better than actually working at the Job Centre. If you lost your job there, you’d still have to go back the following day. In retrospect, I’ve lost many a good job through the sack. My last boss asked me if I could think of a number between P44 and P46. The missus lost her job too. She’s developed rheumatism in the shoulder and can’t throw the harpoon any more. It’s all very sad...

Over the weekend, I received a weird text from a number I didn't know. I texted back, "Who is this?" Then got a message back saying, "I'm your worst nightmare!" This left me rather perplexed as the missus was sitting next to me and hadn't moved the whole time. Moreover,
Whenever a woman sez, "We need to talk," why is it never about football?

A little girl and a little boy were at nursery. The girl approaches the boy and says, "Hey Tommy, you wanna play house?" He says, "Sure! What do you want me to do?"The girl replies, "I want you to communicate your thoughts." "Communicate my thoughts?" said a bewildered Tommy. "I have no idea what that means." The little girl smirks and says, "Perfect. You can be the husband." That’s when the fight started!

My little dog Alfie won't stop barking at me! I think that he's asking to call in the betting shop, after which he wants to go walkies down the pub to watch the footie. Then he would like to have an hour at the lap-dancing bar. After that, he wants to pick up a curry on the way home! The sacrifices I have to make.....

Why is ballet pronounced ballet and wallet pronounced wallet but not wallet? The English language is totally weird. It can be understood better by using tough, thorough thought though....

The wife accused me of being tight-fisted. To prove her wrong, I took her out for tea and biscuits. She was quite surprised, as she has never donated blood before. 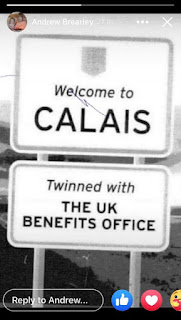 Q) What do I, as a common person, have to do to become an affiliate of this weekly humour column?" A) Well, it's simple. First, stop being common. Next, log on to my website www.ComedianUK.com and answer the following question: Did you ever find a potato that resembled a member of your family? If so, who? Email me: comedianuk@sky.com Now, get back to work!